The Villages of Urbana and the Urbana Highlands are located off of I-270 at the very southern end of Frederick County—making it convenient for commuters regularly visiting Frederick, Montgomery Co., or Washington DC

These beautifully planned communities have amenities designed for an active life style. There are miles of walking trails and sidewalks connecting the communities with an area retail center and public library. There are several sizable pools including a lazy river and play fountains for the kids. There are also clubhouses, and a community fitness center. Tennis and ball courts can be found throughout the communities as well as many pocket parks and tot lots. 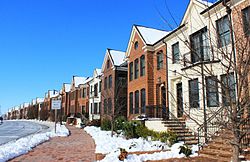 Urbana (pronounced ur-ban-uh) is a suburban census-designated place located in Frederick County, Maryland, United States. It lies at the I-270/MD 80 interchange, about 7.5 miles (12.1 km) southeast of Frederick and about 37 miles (60 km) northwest of Washington, D.C. Urbana started to develop around 1999 and as of the2010 census had a population of 9,175.[1] It is part of the Washington metropolitan area.

The Urbana area was first settled in 1730.[3] It is home to the historic Landon House, which was built in 1754 in Virginia along the Rappahannock River and relocated to Urbana in 1840. The house served as a military academy and a hospital during the Civil War.[4]

Zion Episcopal Church was built in 1802 and served as a house of worship until badly damaged by fire in 1961. Since 2005, it is being restored to its original condition for use as a museum.[5] Amelung House and Glassworks was listed on the National Register of Historic Places in 1973.[6] Stancioff House was listed in 1975 and Fat Oxen in 1979.[6]

Urbana is located in southeastern Frederick County, centered at the intersection of Maryland Routes 80 and 355. Interstate 270 forms the southwestern edge of the community, with access from Exit 26 (MD 80).

Urbana is part of the Humid subtropical climate zone, with hot, humid summers, cool winters, and generous precipitation year-round. It is above the Fall Line,which in turn, gives it slightly lower year-round temperatures than cities to the south, such as Washington, D.C.  Urbana IJamesville and Monrovia MD Homes for Sale

The coldest month is January, with an average low of around 23 °F (−5 °C). Urbana experienced rain 108 days of the year.[10]  Urbana IJamesville and Monrovia MD Homes for Sale

In 1785, a Maryland native named Plummer Ijams I moved to Frederick County, having purchased a tract of land called the “Paradise Grant” from the government. His family was originally from Wales, but emigrated to the Anne Arundel region sometime during the 17th century.[3] The land he bought was located approximately 8 miles (13 km) southeast of the city of Frederick and cost Plummer one pound, fifteen shillings, and four pence per acre.[4][5] Plummer established a plantation on his new land, growing primarily wheat and barley, with a small number of slaves.[3] Plummer I had at least two children: a son named Plummer II, and a younger child named John (born in 1789). Plummer Jr. built a gristmill along nearby Bush Creek (which stood until demolished in 1994) while John enlisted in the War of 1812 and rose to the rank of captain.[3][6] Plummer Ijams Sr. died on June 14, 1796, but his children and their family remained in the area well into the 19th century. 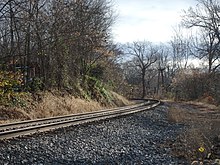 In the 1780s and ’90s, a number of other settlers (including the Musetter, Montgomery, and Riggs families) established themselves nearby, purchasing land either from the government or directly form the Ijams family. One of the most important were the three brothers John, William, and Thomas Duvall, whose 130-acre (53 ha) tract of land became known as “Duvall’s Forest”. The Duvalls discovered large deposits of slate in 1800, and two quarries were operational by 1812, at least one owned by a man named Gideon Bantz.[5][7] Veins of this unique blue-green or purple volcanic “Ijamsville phylite” “lie west and southwest of Westminster and extend southwest from Frederick County into Montgomery County” and are largely responsible for the community’s early growth.[3][8][9] Around 1831, the early B&O Railroad asked the Ijams family for permission to construct railroad tracks through its land. Plummer II accepted on the condition that a depot also be built, in part to ease the transport of slate into the local cities. The B&O then christened the heretofore unnamed community “Ijams’ Mill and Bantzs’ Slate Quarries”. On March 13, 1832, four horse-drawn railroad cars travelled through the town on their inaugural journey fromBaltimore to Frederick.[3] In 1786, the Ijams family requested that a post office be constructed on their land.[4] This marks the first instance where the region was considered a community, before the arrival of the B&O. The office was finally constructed in 1832, and Plummer II served as its first postmaster. On June 22, 1832, the U.S. Postal Serviceshortened the town’s name to “Ijamsville”.  Urbana IJamesville and Monrovia MD Homes for Sale

Monrovia is an unincorporated community and census-designated place (CDP) in Frederick County, in the U.S. state of Maryland. As of the 2010 census it had a population of 416.[2] The ZIP code for the area is 21770.  Urbana IJamesville and Monrovia MD Homes for Sale

The original unincorporated community of Monrovia is located along Maryland Route 75 in southeastern Frederick County, 1 mile (1.6 km) south of New Market. The Monrovia CDP extends south of the original Monrovia as far as Maryland Route 80 and west to include nearly all of Ed McClain Road. According to the U.S. Census Bureau, the Monrovia CDP has a total area of 2.2 square miles (5.8 km2), all of it land.[2]  Urbana IJamesville and Monrovia MD Homes for Sale

Monrovia is part of the Frederick County public school system. Children from the area attend Green Valley or Kemptown Elementary School, Windsor Knolls Middle School, and Urbana High School or Linganore High School, due to redistricting in the fall of 2010.  Urbana IJamesville and Monrovia MD Homes for Sale